It has been years since I had a truly bad Lent --last year was not great but all things considered was not bad. I found myself last night when out walking pondering my disgusting Lenten performance this year and it dawned on me that maybe this had to happen.

For often when things go well or pretty well, we can lose perspective to some extent and maybe laying such a stinky egg this Lent was needed to remind me in a fundamental way that there but for His grace go I.

Or maybe I am just trying to rationalize my own failures.

Or perhaps it is a bit of both?

This is the text of an unpublished Facebook Note From March 31, 2014. My words will be in regular font.

Actually, if one looks at your rationale, this is precisely what you are doing. Just because you do not subjectively recognize it does not change the objective import of where your purported arguments inexorably go.

The Church never ever taught that NFP is meant to be used as a contraception.

It was only be used in exceptional cases.

This is not the Church's teaching but instead is your own. At no point does the Church say NFP is only for exceptional cases. The verbiage is actually just causes and the latter are hardly exceptional or extraordinary.

And yes, NFP is still contraception. That is precisely what it is doing.

How is abstaining from sex during fertile periods contracepting? Simple, it is not. If you are contracepting by abstaining from sex during fertile times, then you have to accuse Mary and Joseph of contracepting because guess what: they abstained from sex during Mary's fertile times!{1} So Mary and Joseph engaged in contraception and thus sin by your absurd "logic" and as we know via the faith that Mary remained sinless, your argument not only does not hold water but you have engaged in blasphemy and arguably espoused heresy.{2} I suggest with all due respect that you take pause and rethink your position here and cease accusing Bill or anyone else of a clouded irrational post considering the objective import of your own statements!

As for the second part of your position, how is having sex during infertile times contracepting? Simple, it is not. God is the author of the fertility cycle and there is no commandment that couples are required to abstain during it. Furthermore, if following God's own laws, there is no wrong committed whereas contraception obstructs or frustrates God's laws. The end may be the same but the means are both objectively and morally different in the eyes of the Church.

What else is contraception but preventing life.

This is ridiculous. By your foolish "logic" if you are married and abstaining from sex with your wife right now, you are "contracepting" because you are preventing life. Better get yourself to confession on the double because by this "mortal sin" you are consigning yourself to hell if you are not having sex with your wife right now! :::rolls eyes:::

It is not artificial but it is still contraception.
No it is not. You obviously do not understand what contraception is and is not.

The aim of both techniques whether natural or artificial is to prevent life from forming (contra-caption, against life). Whether the reason is grave or not, that is it's immediate intent.

Two points: (i) the reason to use NFP does not have to be grave according to Catholic teaching -just reasons is the criteria the Church sets down, and (ii) there is no impediment to conception with NFP during an infertile part of the cycle. By your "logic" an infertile couple is "contracepting" every time they have sex and thus sinning: again your "logic" betrays you as does your ignorance of Catholic teaching.

That is why it is only be used on grave situations -e.g. because of the health of the mother and only temporarily.

Nice try but you are wrong again. The Church does not teach that NFP can only be used in "grave" situations: that is a mistranslation from the Latin text probably originally committed by an overly scrupulous scribe.{3} The actual meaning of the Latin is just causes and again, these are not exceptional or extraordinary.

The principle to be followed is that the reasons should not be trivial or light for the usage of NFP but regulated by real reasons of a serious nature. And the determinants of this criteria are the couple themselves with the assistance of their confessors/spiritual directors not you, me, or anyone else. The Sacred Penitentiary from the earliest of days when they begin addressing these issues{4} down to the present day has said the same thing: "After mature examination, we have decided that such spouses should not be disturbed [or disquieted], provided they do nothing that impedes generation." I suggest that you do as the Church advises on these matters including making the same distinctions they do. Otherwise, you are not thinking with the mind of the Church on these matters

{1} They also abstained in non-fertile periods too but my issue here is your flawed argument.

{2} Either way, if St. Jerome were in the room he would smack your face for such inferences!

{3} I will presume for the sake of charity that their error was not intentional.

Points to Ponder:
In John 3, when John the Baptist is asked whether Jesus is the Messiah, John says quite clearly that Jesus is the important one: 'He must increase, I must decrease.'

He must increase, I must decrease. Everybody needs to hear that. It's not about me, it's not about you. It's about something infinitely more important than us. [Fr. Robert Taft SJ]
Posted by Shawn at 12:00 PM

The following was an interesting comment from Facebook on the subject of the word perfidious in light of some self-styled traditionalists who are eager to celebrate not just the pre-1970 Good Friday liturgy but the pre-1955 one. Basically, they just want to refer to the Jews as perfidious and try and cloak their noxious behaviour with the veneer of appeals to antiquity. The poster here really nails the subject well so I post it here for consideration as Good Friday is approaching. Without further ado... 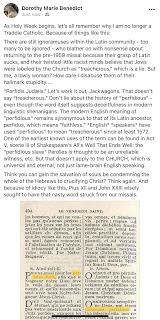 Though to be fair, this is only aimed at certain radical apologist reactionary sorts. Nonetheless...

"Let us pray also for the perfidious apologists that the Lord our God may take the veil from their hearts and that they also may acknowledge the damage their ignorant hamhanded theologically stunted proselytizing does to the honour of our Lord Jesus Christ. Let us pray: Almighty and everlasting God, you do not refuse your mercy even to the apologists; hear the prayers which we offer for the blindness of those people so that they may acknowledge in authentic dialogue the light of your truth, which is Christ, and be delivered from their darkness."